Bantam A – Evan and Adam Zucker

Zach Pochiro of Las Vegas – drafted by the NHL St. Louis Blues in 2013 – will report to the Blues main training camp next month. Zach, 22, will skate with the Blues, then report to the AHL Chicago Wolves where he is scheduled to begin the season. 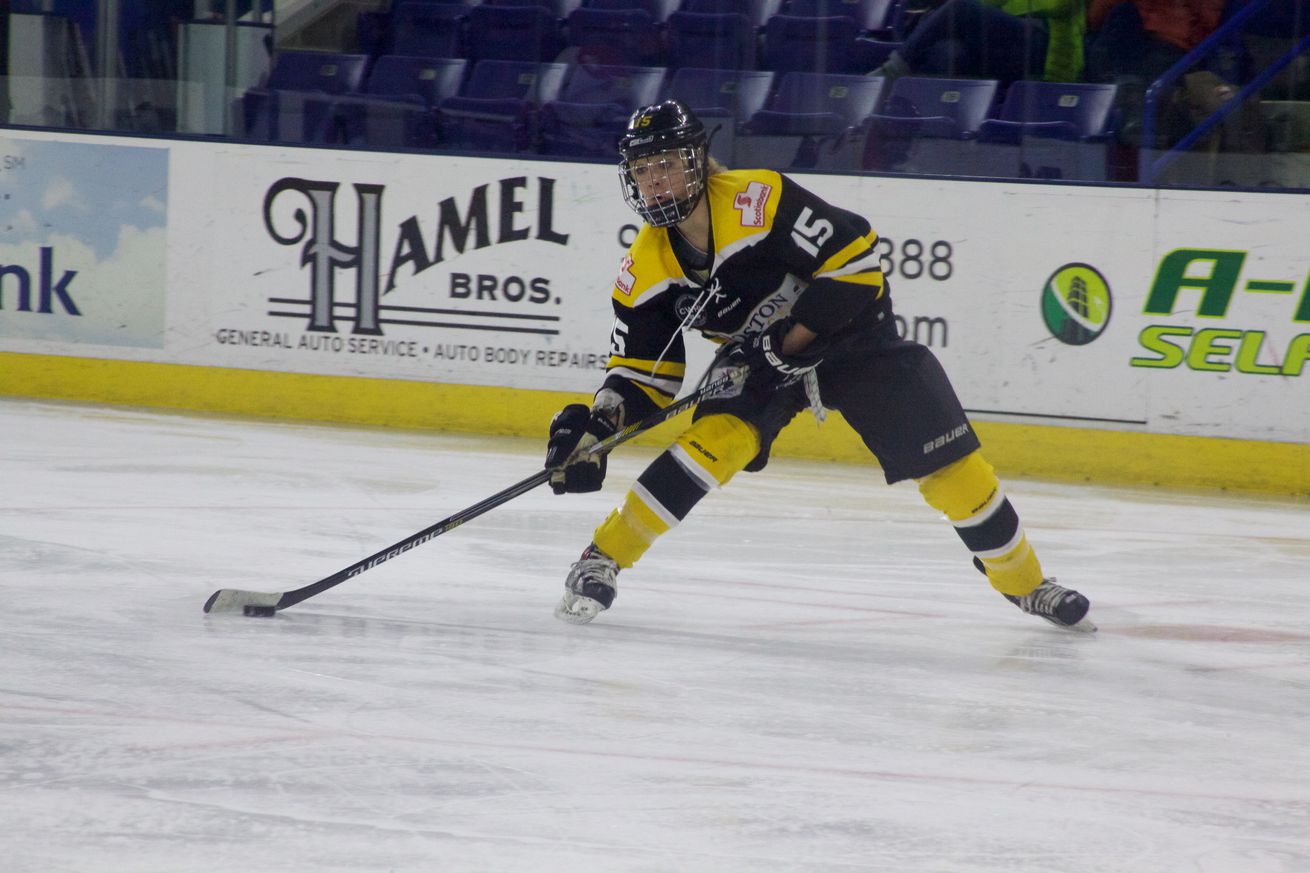 Goal scorer Megan Myers of Las Vegas returns for her 3rd season with the Boston Blades pro team this fall.

As AAA players and goalies begin to report to coach Micah Sanford’s Nevada Storm’s 16u elite travel team at the Ice Center many may not know Micah is one of the greatest players and goal scoring heroes in Las Vegas hockey history. This weekend we will salute him in our story The Greatness of Micah Sanford exclusively here on Vegashockey.net

This amazing story from the Utah Regulators youth hockey program was published two years ago here on Vegashockey.net – This story is searched and viewed by our readers everyday worldwide – Lee

When Utah Regulators president Mike Holmes first helped create a special needs hockey program in Utah back in 2008, he had no idea it’d grow to be as big as it is today.

The organization has a south team located in Provo and a north team in Salt Lake City and is comprised of male and female players ages 5-50 with cognitive disabilities. The only requirement to participate is that the players be ambulatory and able to take verbal instruction.

The ECHL’s Utah Grizzlies are a main supporter, while the Regulators are the main sponsor, providing gear and finances when needed. The Grizzlies provide the jerseys, ice and tickets to their games.

There are no fees assessed to the players due to the high cost of care and treatment, and games are played The Peaks in Provo and the Olympic Oval in Salt Lake City.

“Some of the players are quite memorable,” said Holmes. “Kanu had great difficulty wearing his helmet. He’d tear it off and throw it across the ice. It took three years for him to understand that he couldn’t go onto the ice without it. He still hates it, but wears it anyways.”

“Jhessi wouldn’t speak, but loved being on the ice. For four years, she needed full-time support on the ice. Finally, one day when the support wasn’t right there when she was ready to go, she just couldn’t wait any longer and just took off on her own. She’s been doing it ever since.

“Douglas has cerebral palsy and had one foot that turned inward. He couldn’t speak, but had devised his own sign language. We jerri-rigged a tripod that would allow him to be strapped in and keep him from falling over. He insisted he be allowed to go on the ice without help and did just fine.”

Deann Torsak, a parent and co-manager of the south team, has been impressed with the program since Day 1.

“My son, Jathan, is one of the original six from when this started and hockey has given him a sense of belonging,” said Torsak. “He had played other sports in the past with some success, but never really felt any connection to them. With hockey, it’s a completely different story.”

Rich Henricksen has a daughter, Karissa, in the program and coaches the north team. His wife, Tammie, is one of the team managers.

“Karissa has Down Syndrome and hockey helps keep her active,” said Henricksen. “Playing hockey has been a big positive for her. In the past, she’d watch dad and her two brothers play. Now, she has her own team, everyone watches her, and she loves it.

“She loves skating with her friends and scoring goals. She’s always packed and ready for practice on Saturday and can’t wait to get on the ice.”

The local high school hockey teams play games with the teams, making sure each kid scores at least one goal. The special needs kids generally win every game by a score of at least 25-0.

“The volunteers and high school players have been wonderful, working with a great deal of patience and dedication,” said Holmes. “They generally pay for the ice and donate an afternoon as volunteers, all to make memorable experiences for some very special kids.”

Holmes says the players love the camaraderie, the colorful jerseys (some insist on sleeping in them), equipment and the idea that others are there to watch them.

“My association with these kids has been wonderful,” he said.

Las Vegas – Star Las Vegas defenseman Mike Trimboli, who played four seasons for powerful Utah State, will depart this Saturday to head for his new team EHC Neuwied in Germany. Mike will depart from Las Vegas, connect to Seattle where he will meet Utah State teammate Rylee Orr of Maple Creek, Saskatchewan. Together they will get onto a flight to Frankfurt.

Trimboli, 24, is listed at 6’1, 185. He played four seasons for Utah State which advanced to the ACHA U.S. Nationals three times. Trimboli in his career played in 133 games for Utah State and had 14 goals, 67 assists.

Ondreij Sedivy and John Lammers scored to help Las Vegas coach Rob Pallin and his HC TWK Innsbruck team of Austria win a pre-season game on the road, 2-1 over Rosenheim, Germany. Coach Rob and his team are now off to play in Ritten, Italy.  HC TWK Innsbruck is now 2-0-0.

Las Vegas –  Players will hit the ice for the first time in what WSHL Las Vegas Storm GM/head coach Gabe Gauthier describes as a “skill skate with groups of players” on Monday, August 21 at the Las Vegas Ice Center.

All of the Las Vegas players including Vito Carlo, Brendan Fehlig, Jake McKenna, Kyle Molony plus the debut of Las Vegas goalie Rhett Bruckner will be on the ice.

Bruckner last season for the AAA L.A. Jr Kings 16u in nine games had a 2.33 gaa and a 90.4% save percentage. Those are outstanding statistics

Defenseman Tino Nummela, who played most of the season with the Storm and then was traded to the Valencia Flyers, is back in camp. He is a tough, rugged defenseman from Finland and will be at the workout on Monday.

Gauthier said that an AAA skater – Alex Furste – wll be in the group to shake out. Alex will be skating for the Micah Sanford AAA Nevada Storm 16u team this fall.

“We have players in town now and we expect all of our players to be with us by September 8,” Gauthier said.

Las Vegas – When it was crunch time with the overhead Pepsi scoreboard ticking down the final precious seconds Jason Zucker delivered what the big crowd wanted – spectacular goals when his team needed them the most.

Jason, the first and only Las Vegas player in the NHL, wore red and green – the same colors as his NHL Minnesota Wild – cruised about and then scored goals – boy, did he – to the delight of a packed Sobe Ice Arena on North Rancho Drive on Saturday night.

Near the end of the Las Vegas Firefighters Youth Foundation charity game Jason made a run at the net, stopped, deked the goalie and slipped in a goal into the lower left corner. A few moments later he was in the slot area and unloaded a blue-streak blast which ripped into the net. The crowd stood and roared.

It was exactly what they wanted to see.

This was basically Jason’s red-jersey team against the Chris Francis white-jersey team. Chris will soon report to the NHL Minnesota Wild’s AAA affiliate team the Iowa Wild later this month.

There was a big festive crowd at the SoBe. The NHL players included Deryk Engelland of the NHL Calgary Flames and George Parros who played for the 2006-07 Stanley Cup champions Anaheim Ducks. Hockey sticks from Jason (signed when he was 16 years old), Engelland and Parros were auctioned for charity.

From the Blue Line –  Gabe Gauthier and Adam Naglich of the Red Team each had a great skate.  Gabe was all over the ice. Adam made those long, graceful strides while roaring down the outside lanes….Jason Z said he had a blast and said his throttle was “about 50 percent” to what he usually plays in an actual NHL game…Jason’s lovely bride Carly was at the game, as was hockey dad Scott Zucker….Yes, Jason carried his own custom sticks and hockey bag in and out of the arena.

Chris Francis of Las Vegas looked very sharp in all phases of his play. His hockey mom Cindy was at the game…The Ricketts family – hockey mom Charla, skater Beau and his sister Tulsa with her husband Brian were in the front row of the upper deck bleachers, overlooking the south blue blue….Vito Carlo’s hockey mom Rosie was near the south rink glass. Vito skates for the WSHL Las Vegas Storm junior team which shakes out on the ice Monday over at the Ice Center……The Jared Jaeger hockey family were over by the south rinkboards and so was long-time Las Vegas roller coach Oren Galor…The officials were Ryan Townsend and Adam Stio….

Wally Lacroix, GM at the SoBe Ice Arena and head coach of the AA Nevada Storm 16u, showed reporters the new locker rooms for the Storm players – bright, freshly painted and scrubbed, nice and spacious. Wally is very excited about his club….

There were a number of announcements that UNLV will be playing some home games at the SoBe. The UNLV logo was carved into the ice.

The winning team last night: Chris Francis white jersey team 11, red jerseys 10…but what a finish in the very last moments of the game…Jason will soon report to the Wild at pre-season camp.