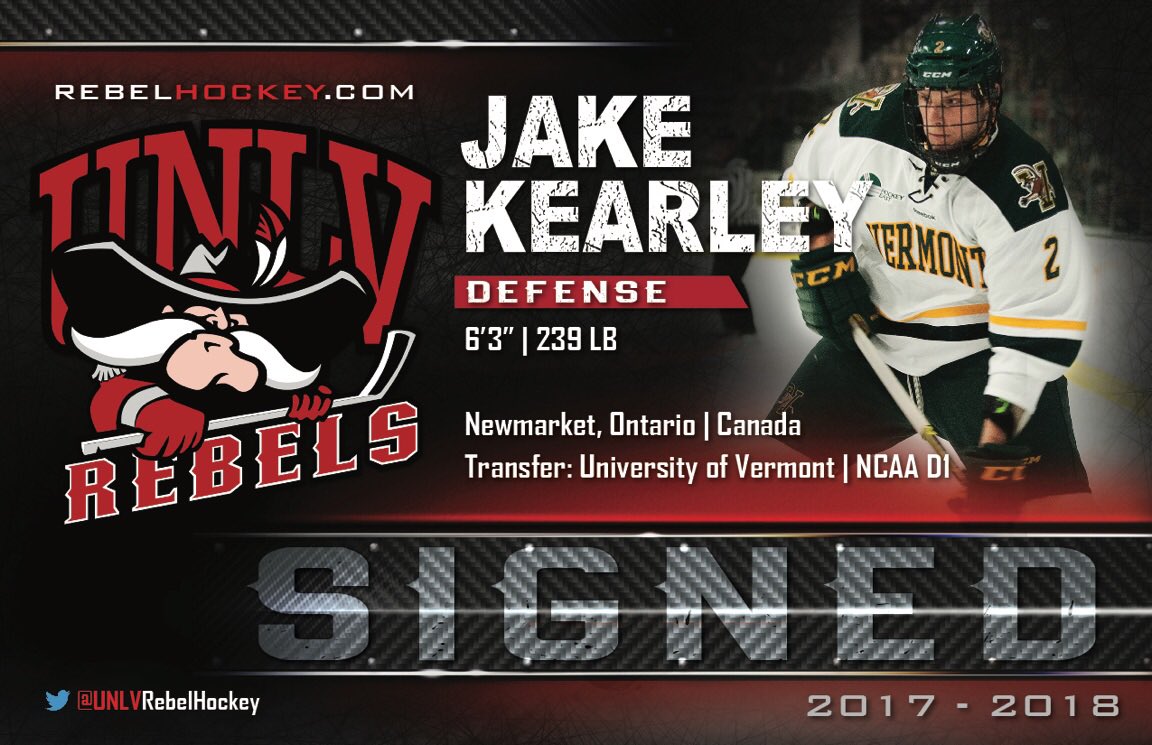 LAS VEGAS PLAYERS AWAY FROM HOME

Glen Falls, N.Y.  – Cory Ward of Las Vegas scored one of his most dramatic greatest goals – an OT game-winner in a series-clinching 6-5 win for the Manchester, N.H. Monarchs over the hometown Adriondack Thunder before 2583 at the Glen Falls Civic Center. The game was tied 5-5 in regulation, then Cory scored 2:57 into the overtime period. Manchester won the Best of Seven series 4-2. Cory was selected the #1 Star of the Game. It was Cory’s 18th goal this season.

It was a huge win for Manchester which was eliminated by Adirondack in the playoffs last season. Cory and the Monarchs advance to the next round of playoffs, a Best of Seven series vs the Brampton Beast of Canada. The Monarchs are affiliated with the NHL L.A. Kings.

Eddie Del Grosso is unquestionably the best ever defenseman in Las Vegas. He won by a landslide of votes over a big field of the greatest defenseman who have ever played the game here in town. Eddie, a dynamic player who had tremendous offensive skills, won many awards on every level of the game he played.

Eddie, 31, said it was hockey coach Rob Pallin who switched him to defense when he was a young teenager. Eddie then became a star hometown defenseman on coach Rob’s early teams – the 2000-2001 AA Las Vegas Mustangs followed by the 2001-02 Mustangs who were the first from Las Vegas to play in the U.S. Nationals.

“I was a forward up to the age of 14 when coach Rob said defense would be perfect for me. In my first year of midget level hockey I had an unbelievable year. I just loved playing defense as you have more control of the game. I like seeing the game in front of me. My first defensive partners in those big midget level games were Chris Anderson and Justin Johnson.”

Pallin, who is now coaching HC TWK Innsbruck in the Austrian Hockey League, said Del Grosso had “an amazing skill set and I knew playing defense would be a better fit for him.”

Eddie D scored many game-breaking goals as a defensemen the same way he did on the junior level with the USHL Indiana Ice and later as a star defenseman with Nebraska Omaha where he set scoring records. Eddie said his all-time defensive partner was Marc Bernier at Nebraska-Omaha.

“We just had good chemistry on the ice. We always knew what the other was thinking,” Eddie said.

Eddie was named to the CCHA All Rookie team, then a year later to the All CCHA Team.

He skated in the NHL Washington Capitals developmental camp as well.

When Eddie played for the USHL Indiana Ice he was an awesome playmaker and goal scorer on powerplays. Lincoln Stars coach Steve Johnson used to keep a defenseman “right on Del Grosso” when the Stars were on penalty kills. Still, Del Grosso found room to skate, pass and score – and he did all of this in sold out arenas throughout the USA and later in Europe.

Eddie and Eddie Samuels of Las Vegas were best friends on and off the ice, first with the AA Las Vegas Mustangs, then with the AAA San Diego Jr Gulls who were coached by Rob Neumann.

Eddie Del Grosso was a star player for the AA Las Vegas Mustangs, AA Las Vegas Rebels, AAA Las Vegas Outlaws – all coached by Pallin.  Eddie was recruited initially by Ohio State but accepted a scholarship to the University of Nebraska where he was on the All Rookie CCHA team in his first season of collegiate hockey.

Eddie Del Grosso played in Europe for two seasons, then returned home to close out his career with the ECHL Las Vegas Wranglers.

Richie Crossley and Devin Lane were awesome together on an AA Las Vegas Ice Cats 18u team which was coached by Eddie Samuels, then Matt Stang.

Crossley and Lane were voted as the Best Defensive Pair.

“This is quite a honor. No matter how big the game was we had a lot of confidence in each other while on the ice. It worked out great for the two of us,” said Richie.

ALL TIME LAS DEFENSEMEN VOTED BY READERS ON VEGASHOCKEY.NET

Las Vegas hockey coach Rob Pallin – the Austria League Coach of the Year with HC TWK Innsbruck who were in the playoffs this season – is back in town and will meet with media today. He is a HOF Vegashockey.net hockey coach.

Goal scorer Cory Ward with the ECHl Manchester Monarchs is the only Las Vegas player still active this season. Cory and the Monarchs are in a tough playoff series with the Adironack Thunder who play out of Glen Falls, N.Y. Cory and the Monarchs lead the Best of Seven 3-2. Game Six of this series is at Adironnack on their home ice Tuesday evening.

The Las Vegas Defenseman of All Time as voted by readers here will be released Wednesday evening this week on Vegashockey.net. There will be two teams of All Time Las Vegas defenseman announced as determined by voters who cast online ballots here the last two weeks.

//Jason Zucker of Las Vegas and the NHL Minnesota Wild scored in this game but the season came to a close on home ice at the Excel Energy Center. St. Louis won the Best of Seven, 4-1

//Cory Ward of Las Vegas one assist for Manchester. Monarchs lead the Best of Seven 3-2. Game Six will be vs Adirondack on Tuesday on their home ice in Glen Falls, N.Y.

//Chris Francis of Las Vegas and the Quad City Mallards scored in this game. The season however, came to a close. Fort Wayne won the Best of Seven 4-1.  Quad City coach Phil Axtell told the hometown Quad City/Moline newspaper “…I’m extremely proud of our group. Our players never quit, not even on that final faceoff.”