Las Vegas roller hockey coach Adam Stio is involved in a number of interesting hockey-related projects heading into this summer.

Here are summertime plans for Adam who has coached roller hockey, has managed a roller hockey arena and has played the game.

Adam said “we have a new company that I have been concentrating on called Rotator Sports. We make custom team apparel, uniforms and tons of extras like compression sleeves, towels and others things.

“For hockey we have uniforms, shells, socks, roller pants and we will be having a couple of teams representing our company at various roller hockey events – TORHS in Tampa and NARCh Nationals in Toronto.

“I am currently working on a training puck. It will be the same weight and dimensions as an ice hockey puck but it moves like a puck on the ice. It works on most surfaces and we’ve already had some amazing reviews with our prototypes. The production run should finish by the end of June and we will do final testing before release which we are hoping will be before the end of this summer just in time for the new season.

“We’ve been offered a couple of coaching jobs again for spring and summer – but not sure if we will take any. Offers have been good but I would only leave town if something really good came up.

“We really enjoyed last season. We took over the Las Vegas Wolves and we are hoping to make them bigger and better for the upcoming season.”

Adam Naglich, an ’84, grew up in Las Vegas and skated on the ‘Red Line’ with Josh Jasek and Eddie Samuels on a Rob Pallin-coached 2001-02 Las Vegas Mustangs 18u team which won the Pacific District Regionals and played in the U.S. Nationals. From there, Adam played with the BCHL Victoria Salsa, was a captain with the University of Alaska Fairbanks Nanooks, played in the ECHL with the Bakersfield Condors and finished his hockey career in Europe. He will be a coach this season in the AAA Vegas Jr Golden Knights youth hockey program.– Lee

#1 What was it like to play hockey in Europe

“The league I played in Europe was similiar to playing in North America. I would say it’s a little bit less physical and with the bigger ice you have more time to set up a play.”

“I was born in Las Vegas. My first year was playing for the midget team Las Vegas Mustangs. My coach was Rob Pallin.

#3 Do you remember your first goal

“I don’t remember my first goal in midget hockey. I only remember being able to stop on one side as I really struggled during my transfer from roller hockey to ice hockey.

#4 Looking back, what did playing for AA Las Vegas Mustangs 18u mean to you – playing on a team which went to the U.S. Nationals.

“I had a lot of fun that year. We had a great team and group of guys. I remember a big win over Shattuck St. Mary’s 2nd team in Colorado and also a win over the AAA L.A. Jr Kings at the Santa Fe Ice Arena in Las Vegas.

#5 What was the transition like, going from midget hockey to junior hockey with the BCHL Victoria Salsa

“The jump from midgets to junior was the biggest I ever took. You go from playing against kids to men.”

#6 How many times have you worn the ‘C’ and for what teams.

“The only time I wore the C was in my senior year for the University of Fairbanks.”

#7 What coaches or hockey folks helped you advance to the next level.

“When I was younger playing roller hockey, Larry Sanford always gave me great advice and taught me how to play the game the right way. When I moved to ice hockey Rob Pallin was very helpful. He spent countless hours with me in the summer after my first year of playing ice hockey. It really gave me a great chance to be one of top players the following year, giving me an opportunity in junior hockey.”

#8 Did you go to tryout camps when you were younger.

“I didn’t start playing ice hockey until I was 16 so I didn’t have an opportunity to attend any camps.”

#9 Tell us about your family

“My wife Jaime and I have two children. They are both girls – Ava and Harper.

#10 Do you still play competitive roller

“I have not played roller in years.

“The best advice I was given was always do the small things on the ice when no one is looking.”

“I always look at eliteprospects.com and NHL.com” 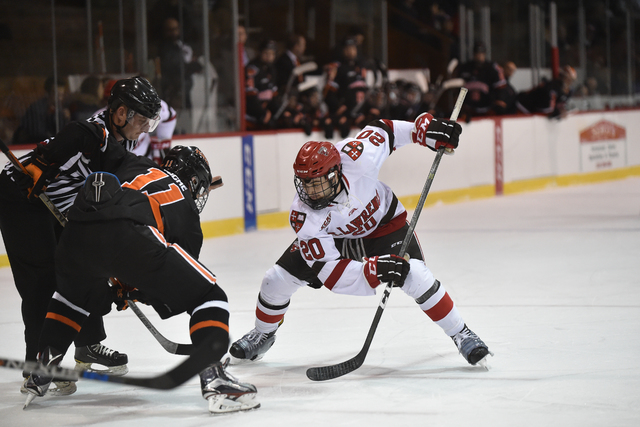 The announcement was made today.

Wahl, 27, played in the AAA Cal Wave 16u and the AAA L.A. Jr Kings 16u hockey programs. He played four seasons with the WHL Spokane Chiefs, skated on a USA 20u team and was drafted in the second round by the NHL Calgary Flames in 2008.

“We saw first Mitch years ago when I was coaching Chris Francis and a Las Vegas midget level team which played against the AAA L.A. Jr Kings in El Segundo,” Pallin said today in Las Vegas. “I liked everything I saw in Mitch in that game – his compete level, the way he ran a powerplay, led his team. I always wanted to have him on one of our teams and at last it has worked out.”

Pallin was named the ‘Coach of the Year’ in the Austria Hockey League last season. His Innsbruck team made the playoffs, drew extraordinary festive crowds.

“We have elite players on our Innsbruck team – like Hunter Bishop for example and many others. We have a great powerplay run by great players. Those are the kind of players you need to compete in our league. It is very competitive and you need the best players.”

Coach Rob, wife Dora and baby Emily plan to depart Las Vegas on July 25 to head for Innsbruck. There Rob will open camp and get Innsbruck ready for the new season.

Morin’s team was in the finals last Memorial Day, but lost to Todd Collins’ AAA Polar Bears of Peoria, Az.

This time, Morin had a top goalie in Fulweiler who plays for Rob Pallin’s 17-and-under AA Mustangs ice team. Fulweiler allowed only three goals all weekend and was named the tournament MVP.

Arizona and Langley were both 4-0 going into the final game. Josh Jasek of Las Vegas and Shane Palmer of Flagstaff scored goals to help Arizona battle to a 2-2 tie in regulation.

The game was decided during the second OT shootout, when Palmer scored again and Arizona got the win, 3-2.

“I’ve seen a lot of hockey,” said Bob Roseberry, GM for the Las Vegas Mustangs, “and this was as good as it gets. That was an exceptional Langley team which came out hitting hard.”

Anaheim, Calif. — Ryan Hobbs usually winds up and cranks in blue-streak shots from long range. In house roller leagues, when he sets up, defensemen run for cover. That’s how hard the shots are.

That gave Las Vegas a 2-1 record for the weekend.

Billy Tufano, Jason Allen and Evan Zucker scored two goals each in the three games. Eddie Del Grosso played, but had a thumb injury on the shooting hand. Goalie Cody Fulweiler, who was also playing ice here for the Arizona Roadrunners at the Disney Arena, started the second game.

That was the toughest one, as the Pro Joy Valley Stars got off to a 4-0 lead. The Stars play out of Northern California and are regarded as one of the top KOHO roller teams from that region.

Pro Joy won this regional, beating NorCal and
Anaheim by scores of 4-3 and 4-3.

NOTEBOOK — Michael Morton, who is tearing up house league action this summer, also scored a goal for the Titans…..Spike Neely pulled a ‘double,’ playing ice and roller this weekend…Joe Morin’s Arizona Roadrunners won two more games, 9-0 and 9-3, and are taking on the high-powered Langley Hornets of Canada on Monday at the Disney Ice Arena.

From the Blue Line, Lee

Tryouts to take place at the Las Vegas Ice Center

Manchester, New Hampshire – Cory Ward of Las Vegas dealt a very key assist in the third period but his playoff ride with the ECHL Manchester Monarchs came to an end in a 4-3 loss to the South Carolina Stingrays before 2255 at the SNHU Arena on Wednesday night.

South Carolina won the Best of Seven series 4-3 and will play the Colorado Eagles for the ECHL Kelly Cup.

Cory, who had 18 goals, 25 assists this season, dealt a game-tying assist for Manchester early in the third period. He and Tyler Sikura had assists on a goal scored by linemate Ashton Rome which tied the game 3-3. South Carolina however later put in a decisive goal to win the game and the playoff series.

Nick Robone, a star player at all levels of hockey and presently an assistant coach with the UNLV Rebels ice hockey team, said “…I will be assisting Scott with whatever he needs and hopefully we will be able to continue to improve youth hockey in Las Vegas.”