San Jose – Captain Ian Davis and the Las Vegas Rebels return to action in two games today – Saturday – in the NARCh Roller West Coast Finals at the Silvercreek Complex. The Las Vegas lineup includes Cody Williams who is one of the all-time goal scorers for the ACHA D1 UNLV Rebels ice hockey team. Travis Barendt is the Rebels goalie. 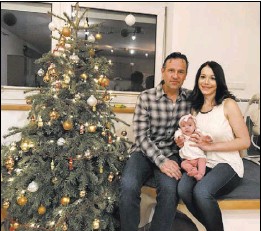 FROM THE BLUE LINE – PRECIOUS MOMENTS

Las Vegas – There we were in church and Emily Charlotte Pallin, age nine months, was getting baptized.

Handwritten invitations had been sent. Las Vegas hockey coach Rob Pallin – now the head coach at TWK HC Innsbruck – was there with his lovely wife Dora, baby Emily Charlotte and dear friends. One friend was Vancouver Dave, parts unknown. Hockey mom Mary Margaret Samuels was there and so were others including hockey dad Greg Yochum, his wife and coach Rob’s sister Blanche all the way from Minnesota.

After picture-taking at the church our group in a caravan of cars went over to celebrate at The Cheesecake Factory on Rampart Blvd here in town.

Sister Blanche got to hockey talk quick. We looked for a pen and some paper. We had no paper so we asked the waiter for some napkins to write on.

Blanche said “did Rob ever tell you about the time he was about 2 years old and his mother put him onto a sled and pulled him to the ice arena. There was a lot of snow and it was like 20 below. The rink was three blocks from our house. Did my brother ever tell you that?”

We said no, then noticed baby Emily was dealing with some issues with baptism gift wrapping paper. It was quite a scene.

Then sister Blanche said Rob years ago got the call which turned his life around.

Rob was spotted playing hockey in a high school tournanment by Frank Serratore who was then the head coach of the USHL Austin Mavericks.

Frank invited Rob to go to a tryout camp.

“But at the time I was big into baseball. I was a pitcher who did very well in high school so I took a pass on the hockey tryout,” Rob said

But Serratore, now the head coach at NCAA Air Force, didn’t give up.

Just then someone – pretty sure it was Blanche – pulled a small brown glass jar of Gerber Oatmeal and Prunes babyfood from a paper bag. Baby Emily was getting excited. She spotted it. Lunch was on the way. One of the hockey Dads groaned as he saw what was happening. He was working on his slab of cherry-covered cheesecake.

Then Blanche said “well, the hockey coach Frank Serratore didn’t give up. He called Rob again.”

This time Rob went to the main camp of the USHL Austin Mavericks.

“Never thought I would even make the team but I went anyway.”

Rob did make the team. He played for two seasons. And while he was playing in games he watched the way Frank Serratore handled the team in the biggest of games – particularly at a finish of a very close intense game.

“I saw his intensity of coaching, the way he worked the lines in a big game, the way he handled us in the closing seconds.

“Everything Frank Serratore said and did stayed with me and is a part of me when I get onto the bench and coach today,” Rob said.

All of that happened many winters ago.

One of the hockey Dads earlier had mistakenly given baby Emily a Raggedy Andy instead of a Raggedy Ann.

She was the shining star at the table.

And for all of us watching her these were….precious moments.

San Jose – Ethan Montoya scored the first goal of the game for the Las Vegas Rebels, then the Revision Revolution scored the last three in the second half here Friday morning in a Men’s Gold Division roller hockey game at the NARCh West Coast Finals. Revision won 3-1. Las Vegas returns to action in its Game Two here tonight at the Silvercreek Sports Complex.

Jason and Deryk each summer skate in a Firefighters charity game at the Sobe Ice Arena on North Rancho Drive. Both sign sticks and jerseys which are auctioned for charity on game night and they each sign autographs for the fans who pack into the arena. It’s been a big summertime event for the past several years.

Jason’s best hockey friend is teammate Charlie Coyle who was the best man at the wedding of Jason and Carly.

Jason – the first Las Vegas player in the NHL – is staying with the NHL Minnesota Wild this coming season. The Wild put him on its protected roster list.

Las Vegas – In the cold North Rink at the Las Vegas Ice Center last night we asked a super scout what exactly is he looking for in a player or a goalie at Roy Henderson’s Global Showcase.

He had a large notebook, a marked up roster of players and was right next to the rink glass whlle peering towards the ice.

Here were his checkpoints in this order:

#1 HOCKEY SENSE – Does a player understand the game, does he know where to be on a break out, does he know his ice positioning to set up a scoring play

#2 SKATING – To play in the WSHL, BCHL or NAHL a player must have tremendous acceleration and quickness. Each player is graded on his skating.

#3 COMPETE LEVEL – How hard does a player compete – does he win puck battles, is he willing to go to the boards and battle for puck possession.

#4 BEHAVIOUR ON AND OFF THE ICE – After a player gets a penalty a scout will look at the behaviour of the player on the bench – does he keep his cool, bark at an official or worse. Top players stay composed.

The scout concensus here, at least the ones we spoke to, say this is the best talent pool ever put together by Global Las Vegas and there are a large number of players here who can go directly into junior level hockey.

Las Vegas – Top roller players from Las Vegas have put together a team for the NARCh West Coast Finals at the Silvercreek Sports Complex in San Jose.

Ian Davis, who plays for the UNLV Rebels ice hockey team and in roller, is the organizer and coach for the Las Vegas Rebels roller team which begins play on Friday.

Cody Williams of Las Vegas is one of the greatest goal scorers in the history of the UNLV Rebels ice hockey program.

The players have been skating in league games at the Las Vegas Roller Hockey Rink over at 800 Karen Avenue to get wired in for the NARCh championships.

Las Vegas – There will be a new team the WSHL Las Vegas Storm will have to contend with this coming season. WSHL commissioner Ron White said the Kent Ravens – playing in the state of Washington – have joined the league. The Butte Cobras have dropped out.

White was at Roy Henderson’s magnificant Las Vegas Global Showcase last night at the Las Vegas Ice Center. Over 400 players from ages 13 to 20 are on over 20 teams who are skating before coaches and scouts from all parts of the USA.

White added the WSHL season-opening games will be on September 22.

Gabe Gauthier, GM and head coach of the WSHL Las Vegas Storm, was scouting for new players as well at the Global Showcase. There were an awesome number of skaters and goalies from Canada, Alaska, California, Colorado, Texas plus hometown Las Vegas players. It was the biggest turnout not only in numbers but in the quality of the skaters looking for teams.

Gauther added that tryouts for the WSHL Las Vegas Storm junior team will be in late August at the Ice Center.

Here are the leading searches and views for Thursday, July 20, 2017