This story was first written and published on Vegashockey.com in 2006. Anthony’s original famous #96 UNLV jersey is mounted high on the south wall of the SoBe Ice Arena on North Rancho Drive, Las Vegas. Anthony is the head coach of the UNLV Rebels, a ACHA West Top 10 rated power. 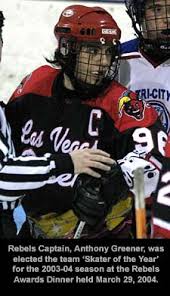 #1
FIRST TEAM
“…..I was 9 years old and I played for the Las Vegas Flames at the Thomas and Mack Center in Las Vegas. My first coach was Earl Brady.”

#2
FIRST GOAL
“…..The same season, when I was 9. I scored that season but…let me think…I’m not sure what kind of shot, probably a breakaway so put that down.”

#3
FAVORITE JERSEY NUMBER AND WHY
“….#96 because that was the year I got serious about hockey. I stopped playing other sports like baseball and dedicated myself to hockey.

#4
FAVORITE LINE
“…..I really enjoyed skating with Conrad Trimbath and Kurt Long while with the Las Vegas Rebels midget team. We worked well together – Conrad was a great passer who got the puck to me; Kurt was a big man in front of the net. Everything just seemed to work with us….”

#5
BIGGEST GAME
“…..In the Pacific District championships with the Las Vegas Rebels we won our first four games, got to the Final Four and took on Kent Valley in a real big playoff game.”

#6
BIGGEST GOAL
“…..I was playing for the Las Vegas Rattlers Jr. B and got the game-winner against the San Diego Jr. Surf.

#7
BEST HOCKEY MEMORY
“…..The season I played for coach Rob Pallin with the Rebels. I really learned a lot about the game from him.

#8
SOMETHING I DO BEFORE EVERY GAME
“…..I tap my chest, point to the sky – I do it before every game.

#10
BEST ARENA TO PLAY IN
“….I always liked playing over at the Santa Fe (Las Vegas). We always had great, hard ice there and we had good skates there.