GM/Head coach Adam Stio said the Las Vegas Cavalry which closed out its season last weekend at City National Arena, will be “back in action as a franchise for sure next year.” The Cavalry plays in the Mountain West Hockey League.

Game Three of a Best of Three Series

//This was a two-game weekend series. On Saturday Wiliam Jacob scored two goals, AJ Lackas one goal in a 3-2 win. On Sunday, Dominic Suhr scored for the Vegas Jr Golden Knights in a 2-1 loss. Zackary Ortolano, a top young goalie in Las Vegas, played in both games. The Wally Lacroix-coached AA Jr Golden Knights bantams were fine-tuning for their upcoming games at the U.S. Nationals.

St. Paul, Minnesota – Jason Zucker of Las Vegas scored his single-season career-best 30th goal for the NHL Minnesota Wild in a 4-1 win over the Nashville Predators here at the Excel Energy Center. Including playoff hockey Jason has 102 career goals for the Wild.

Wheeling, West Virginia – Chris Francis’ 10th goal of the season was on a powerplay for the ECHL Wheeling Nailers in a tough 3-2 OT loss to the Cincinnati Cyclones here at the West Banco Arena. Chris also had an assist and was announced as a Star of the Game. He has scored in three straight games.

Las Vegas – When it was over – a 16-4 win for the Las Vegas Cavalry, big goal scorer Cody Milligan was in the City National Arena lobby leaning on his hockey stick when a little one – maybe six or seven years old – asked him “can you give me your hockey stick.”

“Sure,” Cody said as he handed the stick to him.

“I learned that from playing with the (NAHL) Corpus Christi IceRays, to always promote the sport of hockey. If he wants my hockey stick, I will gladly give it to him,” said Milligan after he scored 4 times from a variety of distances while teammate Richard Prekop had four goals as well.

Milligan, 24, is out of junior hockey where he was such a star player and is now a big, composed scorer for the Adam Stio-coached Las Vegas Cavalry in the Mountain West League. Cody made goal scoring look easy against the Orange County Checkers who came to the City National Arena with a party of eight players and two goalies.

Orange County Checkers coach Tom Brown said “Eleven of our players are either Marines or U.S. sailors,” he said. “They had mandatory manuvers and training exercises and were not available to play. When you are a coach you work with the hand that is dealt to you. We did the best we could.”

The season ended for both teams in this game.

“We finished 10-10-0 in our first season. Very, very happy with that,” Stio said as the Cavalry players crowded together and posed for a team photo in the arena lobby area.

Las Vegas goal scorer Spencer Poscente just finished playing for the USPHL Atlanta Knights. He started in this game and scored his first goal for the Cavalry.

“Now my focus will be going to college and playing hockey there,” Spencer said.

From the Blue Line – OC Coach Tom Brown “teams such as the ones in Vail and Breckenridge are now getting 1,500 or so at home games.”….The Orange County Checkers play their home games at the historic Iceoplex in Escondido, California….

Cody Milligan mentioned his first tier hockey coaches in Las Vegas were Pokey Reddick, Micah Sanford when he played for the 2009-10 AAA Nevada Stars at the Las Vegas Ice Center….

Richard Prekop of Las Vegas is just 22. He played earlier with the WSHL Las Vegas Storm here in town at the Ice Center and two seasons with the South Muskoka Shield in the Greater Metro Jr A League. He has a smooth way of angling towards the net and then lasering  goal-scoring shots.

Las Vegas hockey dad Steve Poscente was the game announcer and he did it so professionally great.

Ontario, California – In a stunner Cody Printzen and Gabriel Testa of Las Vegas and the WSHL Fresno Monsters jolted the hometown Ontario Avalanche 5-0 to force a decisive Game Three in their playoff series here at Center Ice Arena on Sunday. The Best of Three is tied 1-1.

Plymouth, Minnesota – Caleb Day scored – getting an assist from Robert Purdy – for the Vegas Jr Golden Knights High School team in a 9-1 loss to the Billings Bulls here at the USA Hockey Nationals. This was the first Las Vegas High School team to play in the Nationals. It was Caleb’s second goal here as well.  Jacob Paul was in the net for the Vegas Jr Golden Knights.

This was a 2-2 game midway in the second period when Wichita scored a go-ahead goal. Jacob Paul was in the net for the Vegas Jr Golden Knights who are the first High School team from Las Vegas who have ever played in the USA Hockey Nationals. Jeff Bruckner, a premier coach in Las Vegas, is the head coach of the Vegas Jr Golden Knights who take on the Billings Jr Bulls here Saturday.

The Las Vegas team is without its top scorer Mike Yochum who was injured during the regular season.

“WE ARE ON THE RIGHT PATH” 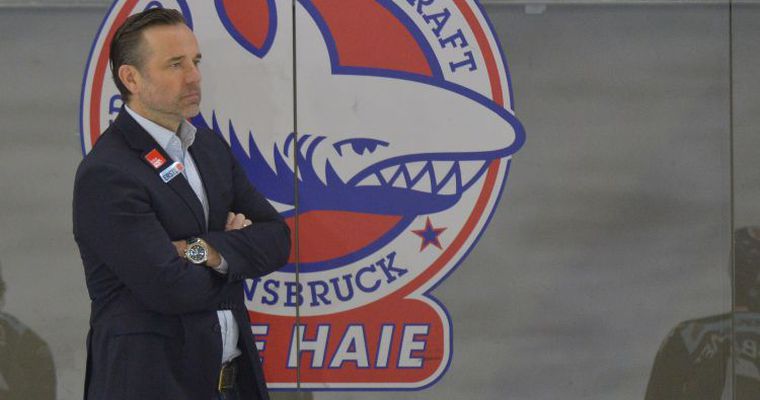 Standing ovations and many new fans won – the dramatic 5-3 defeat in game six and the equalizer in the quarter-final series against the Vienna Capitals had many crying, but also some smiling eyes ready. After many years, there is a real euphoria about the Innsbruck sharks and the team of coach Rob Pallin. The Tyrolean state capital has established itself on the hockey map.
Success trainer Rob Pallin recapitulates after a few days of rest, the most moving and successful season since the re-emergence.

Rob, a few days have passed now, have you digested the described “quick death” and that out in game six against the Capitals?

Well, it gets better, but I’ve already stressed that I still have not quite realized it. We were incredibly close, we brought the champion to the brink of retirement. I also believe that we could have done it. This is bitter on the one hand, but also gives me confidence that we can compete with everyone. Our way is the right one.

This said path has brought the sharks in game six a record visit. In the past 14 years, no more spectators have come to a game of sharks. Does that make you proud?

Of course it makes me proud and confirms our path. It is the reward of hard work and the development of a whole club. But this is not about me. It’s about a whole city and the sport. The “credit” is primarily due to the players, they have done great things and caused a euphoria. I think the team has won hearts and new fans. And that’s the only way

Nevertheless, you have contributed a significant part …

I always try my best. I have spent a lot of work and time in scouting and I am glad that everything went so well. The guarantee you never have.

All the better are then scenes as against Vienna. The atmosphere was unique, right?

It was goose bumps. I did not think that in Innsbruck this atmosphere is possible. That makes the sport so great and gives the club the necessary motivation for the coming years. I would like to take this opportunity to thank all fans and spectators. It was a magical night.

All in all, it was the best season of sharks since the resurgence. How would you summarize your second year?

It’s not that easy after the end of the game, but we improved again and improved a lot, especially defensively. The Tyrolean players have taken a big step and developed strongly. Of course, it is important to continue working here and to do it again next year. But the development is good. We will also be more deeply occupied.
It was a pity, of course, that we did not reach the desired fourth place, which surely messed up our progress. But we must not be dissatisfied.

Purely sporty throws the new season, the shadow ahead. The plans are already running?

Naturally. We discussed internally how we want to perform in the coming season and what personalities can help us here. Of course we want the tribe to keep the identity of the team together as well as possible. We are currently working on that, there are many discussions with the boys. Of course, we always have to move within a framework and here it is necessary to probe. But I believe that everyone has done a good job and is still doing so. I’m very happy that we can keep some players and play a good role again next year.

Where can the journey go? How much is possible?

Honestly, everything is possible. That’s why we play ice hockey and that’s why you become a pro. You always want to achieve the best possible. The goal should be to take another step again. Of course, this is not a matter of course, but over the past two years, a lot of positive things have developed around the club. We work together very well. Here, thanks are due to all helping hands in the club.

How far is one concrete with the player planning?

As I said, we all work very meticulously. There are already some good signals. I am sure that we will see a very hot shark team in the coming season.

How do you personally look for the coming weeks?

I will continue to deal with the club and the upcoming season. I will stay in Innsbruck until the beginning of May and will hold many talks. Of course I will watch some games in the various leagues.

Thank you coach Rob for the interview