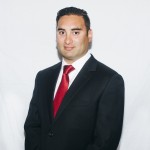 Zee Khan grew up playing hockey in Southern, CA, eventually leaving to play in the prestigious New England Prep School system at The Gunnery School, in Washington, CT. Khan then played junior hockey, with a stop in Las Vegas, eventually going to play NCAA hockey at UMASS. Khan would eventually transfer to Arizona State University, where he finished his college hockey career. Khan has two younger brothers who both also played and graduated from ASU, the youngest, winning the ACHA D1 National Championship in 2014. Khan has maintained close ties to the ASU program as they have laid the ground work and model for the transition from perennial ACHA contender, to ACHA D1 Champion, and now into their fourth season at the NCAA D1 level.
Khan enters his fourth season as the General Manager for the UNLV Rebels Hockey program. Khan was brought in prior to the 2015-2016 season, by current Director of Operations, Arturo Castro, with the common goal to build the UNLV Hockey program into a national contender. With a vision in place, Castro, with a new General Manager and coaching staff, put in place a group that was passionate about building a program. UNLV, perfectly positioned in the Southwest, had seen the program enter a low point. With the successes of Khan’s alma mater Arizona State University, the Rebels needed guidance, and someone to navigate the program, with the goal of constant growth. Khan took on the challenge of helping to rebrand, and build the UNLV Hockey program, using his many contacts within the hockey world, and the ACHA, to help bring credibility to the plans to bring UNLV into the top tier of college hockey. Khan and the current staff, were able to recruit players from the highest levels to come to Las Vegas and help build a legacy at UNLV. With the goal to grow from ACHA D2 to ACHA D1 within a few years, Khan led the transition, and has since seen the program elevate from a ACHA D2 team, to a national contender at the ACHA D1 level in a three year span, having reached the National Tournament as a top 12 seed in their first year, eventually losing to four time National Champion Ohio University. Khan has also been able to help secure the future of the UNLV program through the continued process of building relationships with key UNLV Alumni and members in the Las Vegas community. UNLV has also been able to establish a partnership with the Vegas Golden Knights, entering a deal to practice and play at the new state of the art, City National Arena.
Khan moved to Las Vegas in 2012 and is married to his wife Jennifer, and has a daughter, Olivia.
Contact General Manager Zee Khan:
zkhan@rebelhockey.com