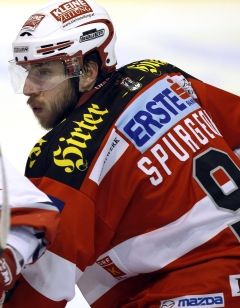 Six points before the break. After the clear 5: 1 victory against Fehervar the day before, it was now time for the Innsbrucker Haie in Villach to complete the mission. The self-confidence after the past victories took the Tyrolean on the bus to Villach.

At the beginning it was the Villach who got into the game better and quickly put pressure. Juvonen in the visitors’ goal but was time and again winner and gave his team extra security. And so the Tyroleans got better by the minute and were able to enjoy the 1-0 lead in minute eleven. Lukas Bär surprised Bakala in the goal of Kärntner and scored his first goal of the season. As a result, the sharks remained poisonous, despite further options, but on both sides should be no further hit.
In the middle section, the sharks then missed the score further to screw up, despite some powerplay possibilities, the 2: 0 initially off. The hosts thus remained in the business and fought back in the 34th minute finally back into business. Lahoda put 1: 1 out of a nice attack. The team of coach Rob Pallin but had the right answer ready and went in double superior again in the lead. John Lammers hammered the glass into the mesh. However, the lead did not last until the second break of the third, because the Villachers used a bitter loss of sharks by the sharks in the middle zone for a second equalizer – 2: 2.

In the final third of the game then waved back and forth, both teams were fully focused in the defense. So the game rippled for a long time, great opportunities were initially in short supply. In the 55th minute, the sharks then had great bad luck, the rod prevented a late goal for the Tyrolean. The Villach made it better on the other side and apparently made the big Lucky Punch in double out of. Two minutes before the end, the Carinthians cheered on the supposed 3-2 victory. But the sharks did not give up and cheered a second (!) Before the end over the happy balance. Top scorer Andrew Yogan secured the Innsbruckers a very important point.

In overtime the game continued to be exciting with good opportunities on both sides. Goals remained but so had a penalty shootout determine the winner. And this shootout was hard to beat in terms of drama. Tyler Spurgeon then kept his nerve at the end and secured his team the second point.