Manchester, N.H. – Cory Ward’s 9th goal of the season was a dramatic one. Cory, from Las Vegas, had a late-game goal to help the ECHL Manchester Monarchs beat the Maine Mariners 3-2 in a New Year’s Eve game at the SNHU Arena. Cory is plus 9 on the ice this season for Manchester.

Michael McNicholas of Las Vegas had an assist for the Mariners. Michael has 11 goals, 18 assists this season. Outside the arena tonight it was a freezing 17 degrees during the game.

Thank you – Thank you.

There are a record-breaking number of readers today on Vegas Hockey mostly from the USA, Canada and including Austria, Ireland, Germany, Mexico, Switzerland and the United Kingdom to take a look at the 2018 Vegas Hockey Awards leading story today. This has been a great year on our hometown hockey website. We want to thank our star writer Bethany Drysdale and all of those who have contributed throughout the year. 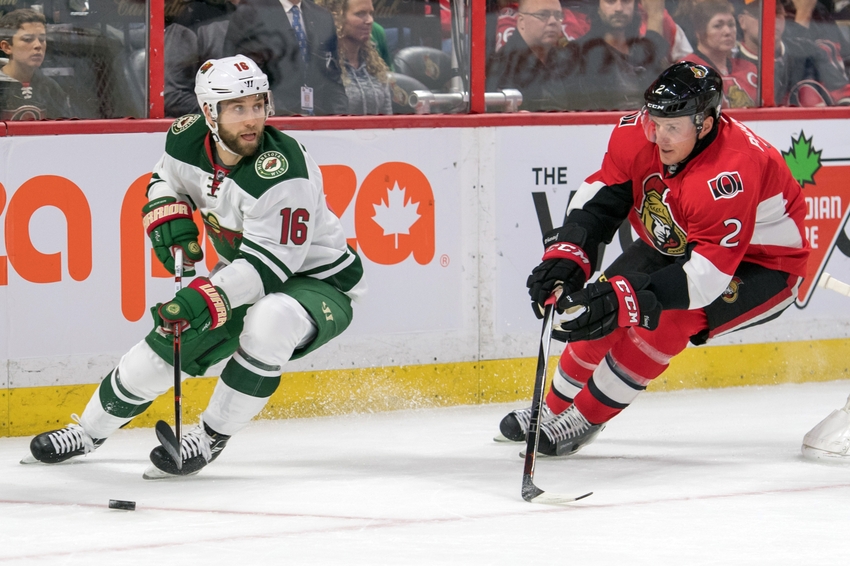 Jason Zucker (16) grew up in Las Vegas and played in youth ice hockey at the Las Vegas Ice Center and was a star roller hockey player here in town as well. Jason is now a star player for the NHL Minnesota Wild. Jason has been voted the Vegas Hockey Player of the Year for a record 12th straight time. Jason Zucker’s banner hangs proudly at two ice rinks in town – the Las Vegas Ice Center and at the SoBe Ice Center. Don’t worry – Jason skated out of this tough situation he was dealing with in a NHL game.

Our Vegas Hockey readers have made their choices and for the 12th straight time Jason Zucker, who grew up playing ice hockey and roller hockey here in town – and is a star player for the NHL Minnesota Wild – is the Vegas Hockey Player of the Year.

Jason last played in Las Vegas at the age of 14 when he was on an AAA Las Vegas Storm 16u team coached by Wally Lacroix at the Las Vegas Ice Center. Jason has been a dynamite goal scoring force on every level he has played.

Jason from Minnesota said “It is a honor to be the Vegas Hockey Player for the 12th straight year. Vegas continues to produce great hockey players. I will always thrive to help the Vegas hockey community grow and become an amazing hockey market. Thank you to all who voted for me.”

Greener, a captain and a top line player when he skated for UNLV, as a head coach has help lift the the Rebels to a competitive force on the ACHA D1 level. He is a repeat winner as the Vegas Hockey Coach of the Year.

“It’s a honor to be called the best coach in Las Vegas,” Greener said. There are a lot of coaches in town who give it their all for the kids and our community. For me it would be surreal to win this award again but it could not have been done without my entire staff. They have helped so much in recruiting areas. Landing the players we did was a group effort and we will continue to do it that way.”

Zee Khan, GM of the Year with the UNLV Rebels said “it is a honor to be recognized by the Las Vegas Hockey Community for all of our efforts throughout the year, growing, not only for our brand but for the sport of hockey.

“It has always been an our goal to have more kids get to the sport of hockey and also give high level players from all over the world an opportunity playing hockey at the highest level. Between Anthony, Nick, Arturo and myself we set our goals high. Transitioning from a D2 program, and becoming a perennial power D1 program required a lot of sacrifices from all of our staff and full committment from the players we being in each year. It is a privilege to be able to work in the sport of hockey each day. We are a family inside of our locker room. We have some big goals for the remainder of the 2018-19 season,” Zee said.

Lacroix is a coach of an AA Vegas Jr Golden Knights 16u which has been playing at a high level all season at the SoBe Ice Arena.

“We are still in the learning phase with our team but I must say I am pleased with our progress so far. There is a long way to go into this season but we’ve been on a fun ride with great young men on the ice for our team,” LaCroix said.

Kendell Galor, the athletic trainer for the NHL Vegas Golden Knights and the UNLV Rebels, is the 2018 Vegas Hockey Person of the Year. In her quiet, unique way she is the best there is trying to help players of all ages in game situations or off the ice physical rehabilitation. Her father is Oren Galor, the legend roller hockey coach here in Las Vegas

Jimmy Samuels, who grew up playing ice and roller in Las Vegas, is now the president of hockey at Kansas University which for the first time ever is ranked #1 ACHA D3 Pacific Divison. Their big rivals include Arkansas, Air Force, Nebraska and Creighton

BEST CHARACTER IN OUR ANNUAL CHRISTMAS STORY ON VEGAS HOCKEY

REAL-LIFE HOCKEY MOM KIM GILILLAND BILLINGS MONTANA. YEARS AGO SHE BILLETTED OUR HOCKEY SON EDDIE SAMUELS AND GOAL SCORER WILL ‘MONEY’ MUNSON WHO WERE PLAYING WITH THE NAHL BILLINGS BULLS. SHE DESCRIBED WHAT BILLETING IS ALL ABOUT AND BECAME A LEADING CHARACTER IN OUR HOLIDAY STORY CALLED ‘JUST IN TIME FOR CHRISTMAS – SHAGGY, THE GOLDEN ONE’ HERE ON VEGAS HOCKEY – THANK YOU KIM

West Valley City, Utah – Zach Pochiro of Las Vegas scored his 17th goal of the season and then dealt an assist to help the ECHL Allen Americans of Texas beat the Utah Grizzlies 4-2 at the Maverik Center. Zach’s 17 goals leads all Las Vegas goal scorers away from home this season. Zach is 24 and is listed at 6’1, 185.

THE VOTES ARE IN – THANK YOU

Your votes are in the house here at Vegas Hockey. We will announce the 2018 Vegas Hockey Awards tomorrow on New Year’s Eve. Winners to be announced were determined by a vote from you, dear readers of this site.

Las Vegas – The Wally Lacroix-coached AA Vegas Jr Golden Knights took a ride to the Sunday gold medal the hard way here at City National Arena last night.  Vegas won 2-0 after fending off a physical showdown against the AA Utah Golden Eagles 16u who had a very crowded penalty box during this ultra-heated game.

The win for the AA Vegas Jr Golden Knights 16u gives them a 3-0-0 record here during this super-chilled weekend and guess what – a rematch with the very same Utah Golden Eagles will be right here on Sunday 11:35 am.

The winner gets gold — the Vegas Confetti Tournament gold medal.

Vegas goalie Zackary Ortolano, who had two shutouts in this tournament, didn’t get caught up in the hurricane of physical activity at center ice and in those dark corners of the arena. And neither did Vegas goal scorers William Jacob and JJ Williamson who zoomed around the big ice arena.

The LaCroix-coached Jr Golden Knights have a certain blueprint to set up their defensive schemes and offensively as well on their precise attack runs. And all of this good stuff is happening without two of the Jr Golden Knights top players including star defenseman Trent Carter who is not available this weekend.

From the Blue Line – Somehow, someway Ortolano kept his temperature on low flame while hot physical action took place pretty close to the net…Your best players – like Vegas goal scorer Ian Williams – play best in the biggest of games and Ian did all of that….Vegas defensemen Sean Kedra and Ethan Parsons sure worked well together – they were awesome to track during the game while moving high-speed pucks to their forwards on outside lanes…..If you take your time and watch carefully, LaCroix has a defensive system which totally protects the net – take a hard look where his defensemen and other key players are stationed during the big Gold Medal game here Sunday…Maybe it’s just me – but the officiating in all of these games has been great – not sure who to thank….

Roanoke, Va. – Derek Sutlife of Las Vegas scored his 9th goal of the season for the SPHL Macon Mayhem in a 3-2 loss to the hometown Roanoke Rail Dog before a crowd of 3492. There was an ultra hot finish to the game with two major penalties for fighting.

Las Vegas – Wally Lacroix’ AA Vegas Jr Golden Knights 16u won again – this time 3-1 over the Boulder Hockey Club of Superior, Colorado here at the City National Arena. Boulder HC worked hard and had a much better skillset and skate speed than the Cal Wave in an opening round game in the Vegas Confetti Tournament. Hometown stars Jacob Underhill, Ian Williams and JJ Williamson scored the goals and the Golden Knights 16u got a great game and effort from Heath Mensch and William Jacob who were all over the ice making tricky effective plays here at the City National Arena before a big crowd on late Saturday afternoon.

“We battled through a lot of sticks out there today,” sighed coach Lacroix. “It’s never easy in a tournament like this.”

Colton Miller was very strong in the net for the Vegas Jr Knights who return to action tonight – Saturday – against the AA Utah Golden Eagles 16u at 6:50 pm.

From the Blue Line – Vegas defenseman Ethan Parsons feathered some nice passes up the sideboards – and he battled through traffic to it effectively….JJ Williamson snapped off some very hard shots – once he gets near the net he’s extremely dangerous…. 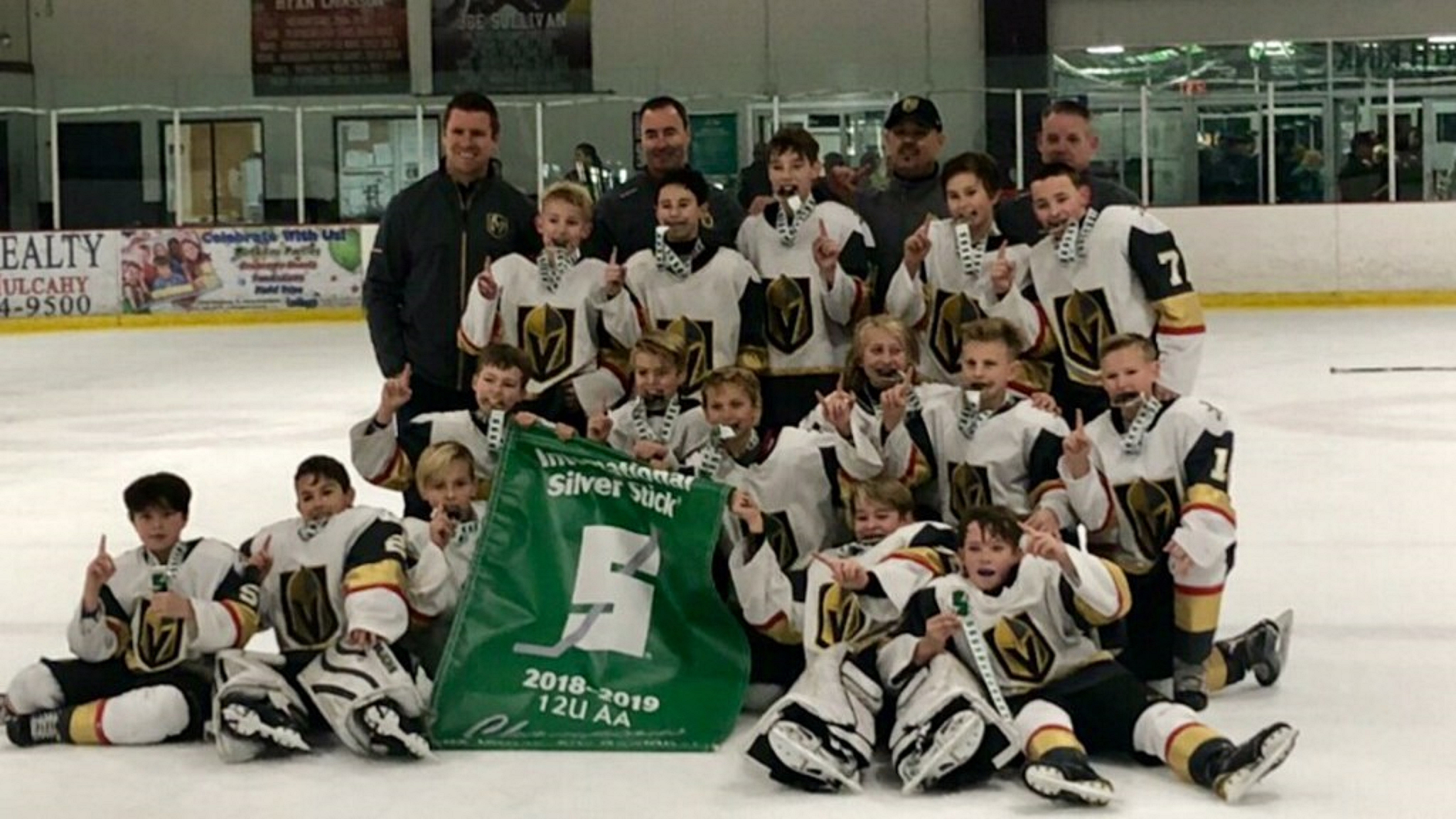 JOURNEY TO THE QUEBEC INTERNATIONAL TOURNAMENT!

The Nationally ranked Vegas Jr. Golden Knights Peewee 12AA Team has been invited to the 60th Quebec International Peewee Tournament held February 13-24, 2019.   Many current and former NHL players played in this tournament when they were 11 and 12 years old.  This tournament will change many of the boys’ lives for the better and create life long friends and memories.

They will have a chance to be seen on an international stage by people from all over the world.    They have done their part in earning this spot, but now we need your help getting them there.

We are asking for you to help these boys attend this prestigious tournament.  Any donation amount will support the team in their quest from $5 to $5,000.

Let’s show these kids they have support and invest in their future.