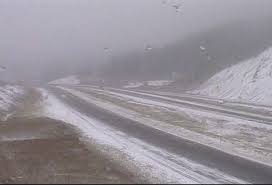 To get to the big sold-out game coach Rob and the Vegas team bus must navigate on a snowy Bozman Pass in Montana where Shaggy the Golden One and his enforcers The Thompson Twins await.

JUST IN TIME FOR CHRISTMAS – SHAGGY THE GOLDEN ONE

Every December Coach Rob and the AAA Las Vegas Mustangs spend their Christmas holidays skating at the annual Vancouver tournament in Canada. This time, however, Las Vegas must beat the AAA Montana Rams, captained by Shaggy the Golden One, in an eliminator game before a sold out crowd of 3200 on a cold snowy night on Big Mountain, Montana.

Real-life hockey mom Kim Gililland from Billings, Montana knows what Shaggy is all about.

“I watched Shaggy play hockey while he was growing up. He could always score goals. But he got bigger and stronger and now when he plays over at the Bozeman Ice Arena there is a golden light from above the arena which tracks him while he skates on the ice during games. That is why he is called the Golden One. The L.A. teams including the Kings don’t come anymore to Big Mountain in Montana. Neither do the top teams from Idaho or Wyoming,” said Kim Gililland. “Vegas will be here because they have to be here.“

Big Mountain, Montana –  On game night and after warmups in the big arena there was a sound of thunder and the arena was blacked out.

When the lights came back on there was a massive 50′ tall Christmas tree at center ice. Brenda Lee’s song ‘Rockin’ Around the Christmas Tree’ was playing real loud. Then the back gate opened and over one hundred ice dancers in their white glittery outfits skated onto the ice, held hands, and skated around the Christmas tree. The fans, all 3200 of them in a sold out arena stood and roared.

Then there was more thunder, the arena blacked out, and when the lights went back on the Christmas tree and dancers were gone and there was the great Shaggy the Golden One with the mean-spirited Thompson Twins standing in front of the Las Vegas bench.

Shaggy stood there in a ray of golden light over him.

Coach Rob cracked ‘don’t your two friends know that Santa is on his way.’

Shaggy got closer to the Vegas bench. You could feel the warm rays of golden light which were on him and no one else.

“Protection coach Rob. They never leave my side. Protection the way you used to have protection years ago with Sean Darby, Justin Grossman, Sean Fox and Adam Zucker protect your precious goal scorers.”

As Shaggy spoke coach Rob looked towards his left side to his bench where GM Greg Yochum, team president John McNicholas, assistant coach Tommy Ricketts, athletic trainer Kendell Galor, Gramps who was lining up the hockey sticks and Vegas Hockey writer Bethany Drysdale who was writing in her red leather notebook. It was Bethany’s first time on a team bench.

“Three people have heart on your team – just a party of three coach Rob,” Shaggy said.

The ice dancers gave the boxes to Kendell, Gramps and Bethany.

“Gramps you are a good man. Bethany, you will soon be interviewing me as the greatest ever. Get your notebook ready. Two pens, lot of ink. Got lots to tell you.

While this was going on the Thompson Twins had icy stares towards coach Rob.

“Kendell the boys want you to come over to our bench. Be with a winning team. We’re going to win, go to Vancouver and we want you to be with winners for the first time in your life.”

“We are Vegas Strong.”

Shaggy turned to Yochum and McNicholas and said ‘hope you two read the rules about this game.”

Shaggy skated off with the Thompson Twins to his bench. Rob turned to Yochum and McNicholas to ask about the special rules. Tommy Ricketts was leafing through his black binder.

Then Gramps said “Skitters is missing.”

Skitters is the baby Vegas rink cat who somehow made her way onto the Vegas bus. She tends to wander on game nights.

“Hey, over here. Missing something,” said the two Thompson Twins. One was holding Skitters the baby rink kitten by the scruff of her neck.

Kendell said “it’s no one’s fault. It’s the psyche game they like to play. No one would dare hurt Skitters.”

Coach Rob asked Yochum and McNicholas “can we turn off that golden light on Shaggy.”

Yochum said “we’re working on it. That kid Ryan Zurfluh of Vegas here has a device on him. He said it’s a triangular system of lighting coming from top of the scoreboard.”

Rob looked up towards the scoreboard. Then his cellular vibrated. It was a live facebook pic of his wife Dora and their two baby girls. All were waving to him. ‘We’re fine – the boys will skate hard,” Rob texted.

In their film study of Shaggy’s team coach Rob noticed they would attack with two very small forwards crashing towards the net with the Thompson Twins flanked next to Shaggy the Golden One on top. Anyone who got close to Shaggy got destroyed. Shaggy was more of a perimeter player firing off 15 or 20 foot laser-type shots.

The game was close, tight and it was coming to a close.

Rob knew when the score was 2-2 with a few minutes left they had to score to win.

What was nagging Rob was what Shaggy had said – do you know the rules about the game.

Rob turned to Tommy Ricketts and asked “what was Shaggy talking about.”

“In the event of a tie the home town advances to the big tournament in Vancouver,” Tommy said.

The score was 2-2 and the clock was ticking down…

Skitters, creeping slowly, made her way back to the Vegas bench and leaped into the arms of Gramps. So she was safe. That was the good news.

The game came to a close. It was a 2-2 final. The hometown crowd roared. All of them – each fan, all 3200 of them – had been given airline tickets to go to Vancouver.

Shaggy The Golden One, the Thompson Twins and the Montana Rams were going to the Vancouver Tournament – not Las Vegas.

“Not fair,’ said Yochum. “This is wrong,” said McNicholas.

Coach Rob watched the fans celebrate. It was maddening. Outside the arena was a major snowstorm. Hockey mom Kim, on the team bench, said “it’s going to be rough going home tonight on the Bozeman Pass.”

There was a message in golden script.

‘Due to the unusual circumstances of this game both teams – Las Vegas and the Montana Rams – are invited to go to the Vancouver Tournament.

“Las Vegas will play Montana in Game One.”‘

Rob looked towards his bench and said …

“We’re all going to go to Vancouver – all of us including players, coaches, Kendell, Bethany, Gramps and of course the one and only Skitters.”

Just in Time for Christmas – Shaggy The Golden One

Lee is the writer of previous holiday stories here including

The Kid Who Never Scored a Goal

Lee and Mary Kate are the authors of..

Miracle at the SoBe Ice Arena

Mary Kate is the author of children’s books including…