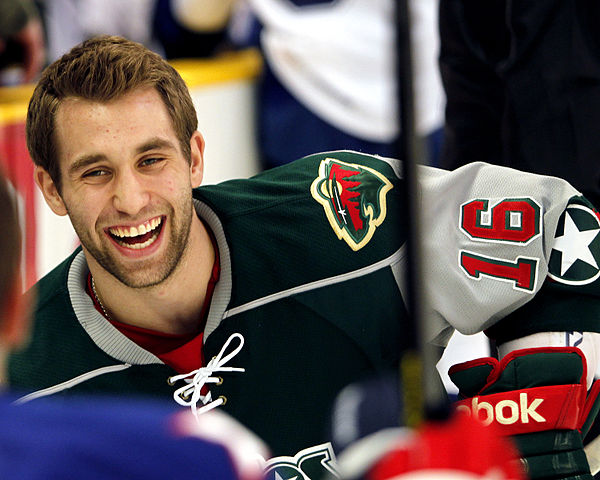 Wild’s Jason Zucker, Wife Carly Give Back to Minnesota

“It’s very important,” Jason Zucker of Las Vegas said. “I think it’s something my wife and I take a lot of pride in. We’ve loved the work that we’ve done and I think it’s a very big and important part of our lives.”

Jason Zucker understands his role as a top-six forward with the Minnesota Wild.

Zucker is also very much aware of his responsibility, he feels, to give back to the community as a professional athlete. Zucker and his wife Carly — a Minneapolis-based journalist and television personality — have done just that as a significant part of the Twin Cities community through their charity efforts.

“I feel that’s a big part of it,” Jason Zucker said of his importance of giving back to the community. “We have such a platform, and I feel it’s my duty to use that platform to create good in this community and in the world. Carly feels the same way and we’ve done our best to do that.”

Most recently, the Zuckers helped fund the Zucker Family Suite and Broadcast Studio at the University of Minnesota Masonic Children’s Hospital. The idea was born in part from a friendship between Zucker and young Tucker Helstrom, who passed away from osteosarcoma, a rare form of bone cancer.

The Zuckers also announced the #Give16 campaign, a nod to Zucker’s No. 16 jersey with the Wild. He gave $1,600 for every goal he scored and the community followed suit, raising more than $900,000 for patients and families at the hospital throughout the 2017 season.

“It was a lot of fun and it was something at first we thought about doing it as a one-season deal,” Zucker said. “Then, we decided that we’re going to continue that through because of how much success we had with it and how much people enjoyed doing it. It turned into a huge success.”

The Zucker Family Suite and Broadcast Studio is also a huge success. The Zucker’s made an initial $160,000 donation towards the studio, which opened in November, while also raising money through the #Give16 campaign.

“It was great to see others follow suit and support us,” Zucker said. “It shows how great the community is in Minnesota and just how everybody rallied behind us and had fun doing it. It really goes a long way. We wouldn’t have been able to do anything that we did without the community.”

The Zucker Family Suite and Broadcast Studio features a state-of-the-art broadcast studio and theater where children and families can view Minnesota Wild games. The theater also features a ticketed entrance with food, beverages and a large projection screen, similar to a private suite at Xcel Energy Center. Staff members and patients can produce programming at the studio, which includes music, game shows and celebrity visits.

“We’re very proud,” Zucker said. “They did a wonderful job building it and designing the space. It’s phenomenal and exceeded our expectations.”

Zucker was most excited to see the Zucker Family Suite and Broadcast Studio combine his hockey career with his wife’s broadcast profession, while also giving back to the community at a place that has been instrumental to them both.

“I think sometimes the hockey side gets blown up a little bit more than it should,” Zucker said. “It’s nice to be able to pull her side into it because she works very hard and does a great job in her career. It’s nice to have her as part of that as well.”

It’s all part of Jason and Carly Zucker’s willingness and commitment not just to the Wild, but also to give back to the Minnesota community.

“It’s very important,” Zucker said. “I think it’s something my wife and I take a lot of pride in. We’ve loved the work that we’ve done and I think it’s a very big and important part of our lives.”