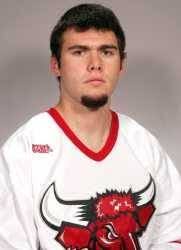 Las Vegas –  Eddie Del Grosso, voted as the all-time Las Vegas defenseman on Vegas Hockey, had a former teammate – Johnny Kemp of Arcadia, Ca. – visit him and his family on July 4.  Eddie D and Johnny Kemp played together with the USHL Indiana Ice in 2005-06. Kemp was a star goal scorer previously with the AAA L.A. Jr Kings tier team which had a number of fierce battles vs Las Vegas Mustangs teams. Both are 33 and are out of the game now, although Del Grosso plays on a club team called Vegas Nights which skates once or twice a week at the Las Vegas Ice Center. Legend hockey moms Patty Del Grosso and Mary Margaret Samuels of Las Vegas were at the July 4 festivities as well.

Hockey coach Rob Pallin of Las Vegas announced today that on August 1 he will be returning to Austria where he is the head coach of the HC TWK Innsbruck pro team.

— From the Blue Line, Lee